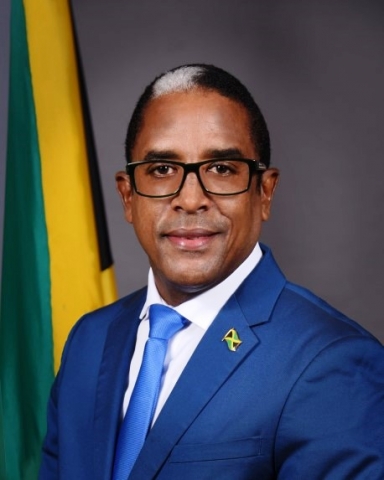 Dr. Dunn pursued his secondary education at the Dinthill Technical High School before attending the University of Technology. He holds a Doctor of Pharmacy Degree, Master of Science in Industrial Business and a Bachelor of Science Degree in Management, Economics and Accounting. He is also the holder of a badge for meritorious service to the profession of pharmacy, B(M)H.

Dr. Dunn's foray into representational politics began in 2016 when he became the JLP standard-bearer for the constituency and was declared the winner after a by-election on October 31, 2017.

Following on his re-election as Member of Parliament for South East St. Mary on September 3, 2020, Dr. Dunn was appointed Minister of State in the Ministry of Industry, Investment and Commerce.

Welcome to the official website of the Ministry of Industry, Investment and Commerce.

The Ministry of Industry, Investment and Commerce is described as Jamaica's "Business Ministry." It's mandate is to lead the development of policies that will create growth and jobs, while achieving social inclusion and consumer protection. The Ministry, working its stakeholders is primarily responsible for business policy development, monitoring and evaluation, while giving direction and oversight to a cluster of implementing departments and agencies.

We have, therefore, placed much energy and enthusiasm into the development of this website to provide timely information on the Ministry, our agencies and programmes.

The Ministry of Agriculture and Fisheries - https://www.moa.gov.jm