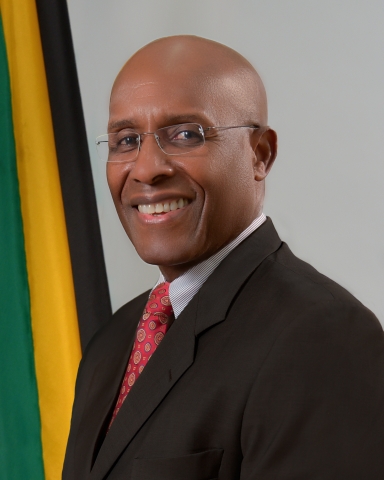 Senator the Hon. Aubyn Hill is the Minister of Industry, Investment and Commerce.

Minister Hill who has an MBA from Harvard University, has over 35 years working experience in the private sector, as well as extensive experience in international banking, having spent more than 21 years as an International Banker in the Middle East.

Minister Hill assisted in, and led the restructuring of two major banks, Burgan Bank in Kuwait, and the National Bank of Oman. During his tenure in International Banking, Minister Hill lived in nine countries and conducted business with more than 115 countries around the globe.

He was also instrumental to the successful turnaround of the National Commercial Bank (NCB). Starting in 2002 Minister Hill led a team that in 19 months, moved NCB’s stock price from J$5.51 when he joined to J$31.70.

Between December 2005 and October 2011 Minister Hill led the team that successfully divested the loss-making government-owned sugar assets, which consisted of five sugar factories and six estates.

Minister Aubyn Hill, who has also served on various private and public sector corporate boards, was chosen as the Chief Executive Officer of the Prime Minister’s Economic Growth Council in October 2017.

In March 2016, Minister Hill was appointed to the Senate by Prime Minister, the Most Hon. Andrew Holness and was subsequently elected as Deputy President of the Senate. He was also appointed as the non-resident High Commissioner for Jamaica to the Republic of India.

Minister Hill’s expertise and years of experience in finance, business management and economics make him a highly favoured speaker at local and international conferences.

Senator, the Hon. Aubyn Hill and his wife, Tamara, have two grown children.

Welcome to the official website of the Ministry of Industry, Investment and Commerce.

The Ministry of Industry, Investment and Commerce is described as Jamaica's "Business Ministry." It's mandate is to lead the development of policies that will create growth and jobs, while achieving social inclusion and consumer protection. The Ministry, working its stakeholders is primarily responsible for business policy development, monitoring and evaluation, while giving direction and oversight to a cluster of implementing departments and agencies.

We have, therefore, placed much energy and enthusiasm into the development of this website to provide timely information on the Ministry, our agencies and programmes.

The Ministry of Agriculture and Fisheries - https://www.moa.gov.jm